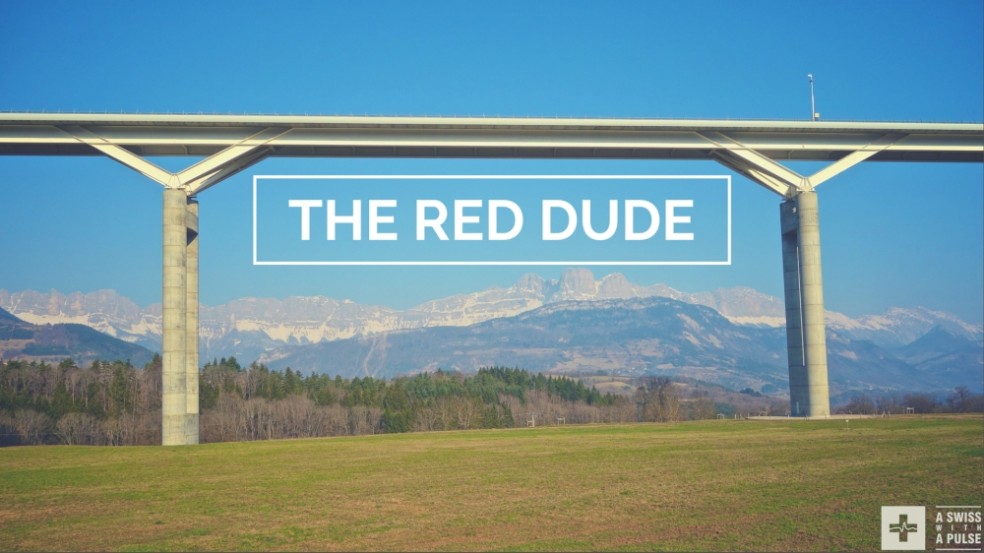 It was almost dark when I got to my hotel last night, but I woke up to an amazing view of the Massif du Vercors this morning. Situated between Provence and the Alps, these mountains were a hotbed for the French résistance during the Second World War. The Vercors is also a paradise for outdoor sport such as cycling, hiking, climbing, cross-country skiing, and host for some epic battles on the Tour de France. In 1989, Laurent Fignon, in the yellow jersey, attacked with 23km to go to take 24 seconds to Greg Lemond in Villars-de-Lans. History would prove it was not enough and he would lose the Tour to the American by just 8 seconds.

Waking up in beautiful Vercors

My plan was to ride all the way to Geneva and catch a train home. I had briefly considered riding towards Chamonix and adding a day in the Alps to my adventure; however the prospect of climbing passes on my 34×27, a huge gear for a touring bike, was not very engaging.

Most of the first 40km were downhill and I arrived in Grenoble with only a vague idea of where I had to go, unwilling to open my Michelin map to confirm my route choices. Big mistake: I lost time, ended up on huge boulevards and pedestrian zones, zigzagging my way through the city. It sucked. Lesson learned: when touring in an unknown area, plan your route, plug it into your Garmin or have it on paper, stick to it and enjoy the ride. It’s all about preparation. Finally out of Grenoble

Eventually I made it out of the urban area and found a great bike path towards Voreppe along the Isère river. A few kilometres later, I decided to follow a ‘Parc Régional de la Chartreuse’ sign. Riding through a park must be cool, right? Plus it looked like a shortcut on the map, which I finally decided to check after my Grenoble debacle.

It turned out that the ‘shortcut’ meant riding through some serious hills, starting with the Col de la Placette. In normal times, it would have been a mere bump (336m of climbing at 6% in 5.2km). But with a loaded bike, it proved another story. I crawled up as if I was badly bonking, except that I was not. I was just slow. Eventually I got to a beautiful plateau surrounded by mountains and kept riding through woods, meadows and villages. After 20km of this, I could only see cliffs and steep slopes around and I was scared that I would have to climb a lot to get out of there (yes, sometimes I am scared to climb). Fortunately, the road went through a tunnel before descending into Chambéry. Like Will Cyclist, I am not a big fan of tunnels but I really loved this one.

After Chambéry I found a lovely Voie Verte. The Voie Verte between Chambéry and Aix-les-Bains

We were in March, on a week day and I saw literally hundreds of cyclist further up on their way to Aix-les-Bains. I can’t imagine how busy this place must be on summer week ends. Is there such a thing as a bike traffic jam? Reflecting on my adventure while absorbing much needed calories

After another #bikelunch on the shores of the Lac du Bourget, I started the last leg of my odyssey to Geneva.

I was not too familiar with the area and did not want to stick to the big Nationales, so this time I decided to test google maps on my iPhone. BIG mistake. Whoever designed google maps does not ride a road bike. The route looked OK on the screen and there were some good moments on small, scenic countryside roads. Until I ended up in a waste collection centre in front of what can only be described as a bad single track diving deep down into a gorge.

I was so pissed off that I did not take a picture, rode back to the main road and opened the good old Michelin map which took me back on the right way to Geneva. By this time I knew I would not make it before dark but I had good lights and was not worried. In fact, I was really enjoying the last kilometres of my adventure, reflecting on how fun it had been to just eat, ride and sleep for 5 days.

I was in this mood as I was climbing towards Cruseilles after crossing the Pont de la Caille. Then, out of nowhere came the Red Dude. Red jersey, red shorts, red leg warmers. By the way he flew by me, I could see that he wanted to show me who’s boss. But he was the first cyclist to overtake me in 980km, and I was not prepared to let him go. Somehow I found speed in my touring legs, jumped on his wheel and hung on. I never saw his face but he was mad, I could feel it from his body language: looking over his shoulder, pushing a huge gear, breathing harder and harder. Several times he tried to drop me, but I was firmly stuck behind him. I almost raised my hands as I reached the top first after sprinting away from the Red Dude.

For a second, I felt like I had vindicated the touring tribe. There are so many sorts of cyclists: the racers, the week end warriors, the commuters, the bike tourists, the triathletes, the messengers, the BMX kids, the mountain bikers, the fixie hipsters, the trackies, the bike polo players… and many more. We all ride on two wheels, and share more similarities than differences. But somehow, we rarely mix. We belong to different tribes, each with its own language and culture.

All along the trip I saw many cyclists from different tribes and said hello to them because well, I am kind of like this cyclist. Very few said hello back. Many just ignored me, as if I was transparent. I was not, I just carried bags on my bike and wore MTB shoes. For the rest I rode the same bike, wore the same lycra and was powered by the same skinny legs as before. But I had moved to another tribe.

In fact, the old guys did see me. Old dudes are cool. They don’t care what kind of bike you ride, if you have a top tube bag, if your legs are shaven, or if you ride at 20km/h or 40km/h. They are happy to be out, they have nothing to prove and say hi to everybody. Is this telling me that I’m getting old?

Anyway, by not saying hello and trying to drop me straight away, the Red Dude perpetuated the ancestral rivalry between the two-wheeled tribes. And I did the same by beating him after a battle as epic as the  face to face between Jacques Anquetil and Raymond Poulidor on the slopes of the Puy de Dôme. Did it feel good? Yes. Do I feel good about it now? Not totally. We should be one big tribe and celebrate our passion together, not against each other as it happens too often. Food for thought. Last col before finishing in Geneva

The last kilometers were a fun, mad dash in the dark weaving through Geneva traffic. After 225km, I arrived at the station, hopped on a train, sat down and ate everything I had left, including a camembert. The commuters on their way home were certainly wondering about this bearded bike bum; it made me smile, because yes: I was a bike bum for 5 days and it felt great.

Still there will be many rides until July, which I am looking forward to sharing on this blog.

Day 3 A Day in the man cave